Every week, the team at BMD look to the wider art world to inspire our creative methodology and design. This week, Bree Spicer, BMD’s Product Manager and Illustrator, happened upon The Power of One: A Dazzling New Revue Opens In Berlin by Sharon Stancavage for Lighting & Sound America. Read on for Bree’s thoughtful response to the article – particularly as a Michigander – and how it inspired her work on a musical that might surprise you!

This production was inspired by an old photograph the creative director, Roland Welke, saw of the Michigan Theater in Detroit. As an original Michigander, this resonated with me as I immediately understood the appeal that Welke was speaking of. For some background, the Michigan Theater was once the jewel of downtown Detroit. Seating 4,038, it functioned as a theater, lounge, and museum. It was immensely popular, but once the 1940s rolled around, movies began taking precedence. There were changes made to the theater in an attempt to keep its relevance, such as adding a big screen (which damaged the original proscenium arch), but ultimately the theater became unprofitable by the 1960s. It then had a briefly successful stint through the ‘70s housing rock shows such as David Bowie and Aerosmith, but this came with a sacrifice; concert-goers devastated the interior of the theater with scars and gum and piles of beer cans. The once-beautiful theater, now in a state of decay, was considered a waste of space by many. In the late ‘70s, it was finally decided that the vandalized theater be converted into a parking garage. Though this may at first seem an insult to the original building, it was better than the alternative- being knocked down. The theater still retains a type of blemished beauty and continues to draw tourists to this day. 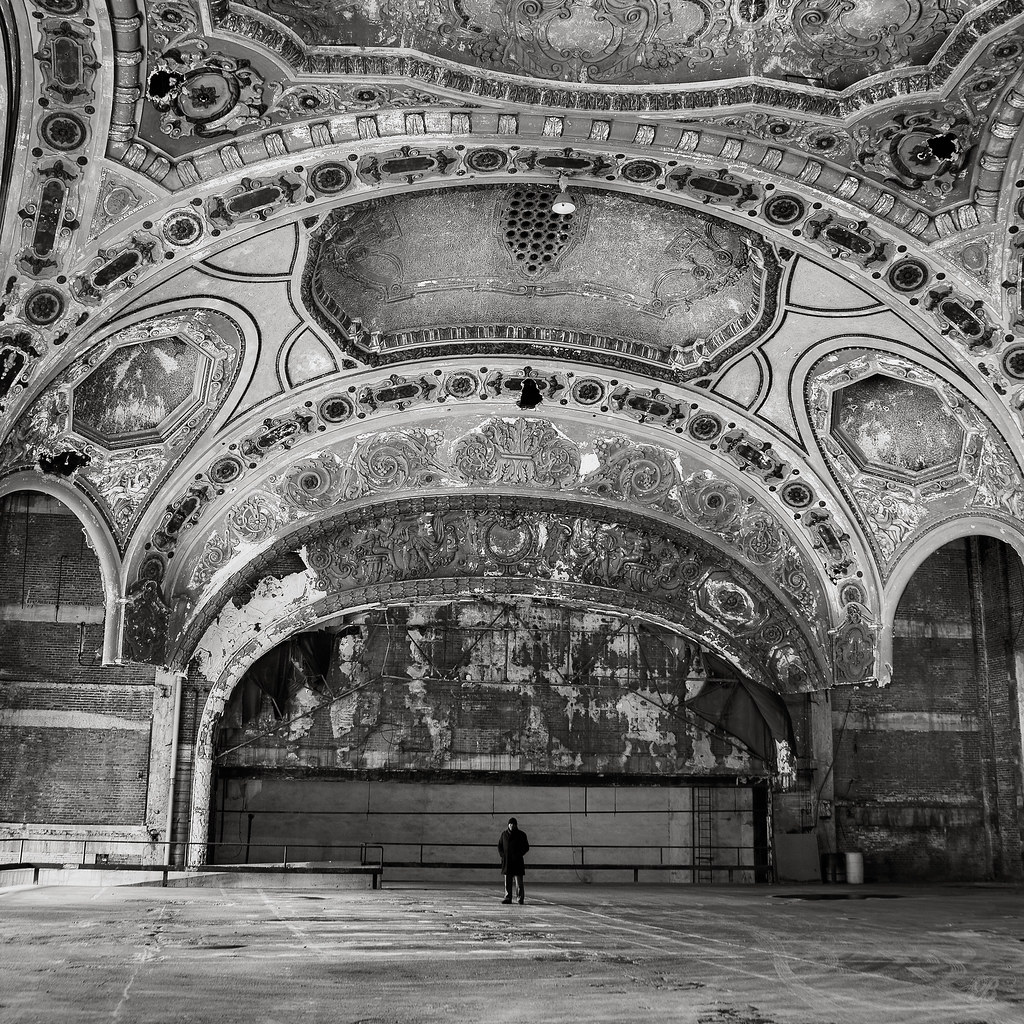 Welke was inspired by this “lost place” and the former grandeur of the Michigan Theater. To make his ideas more cohesive, he paired this aesthetic with the concept of a dream world where a man finds himself in a place that he doesn’t belong. The man discovers an underground rave in a decaying theater, where he meets the former head of the theater, realizes he's in a dream, and falls in love. With such a loose plot, the focus here is really on the visuals; the set is designed to morph in a surrealist way into different settings. As the main visual, they had proscenium arches made of a transparent metal mesh that they projected upon. They were designed to change back and forth between their previous splendor and current decay through the use of these projections, echoing the path that the Detroit Theater took. The video designer, Vidal, states that they wanted to use surface projections here to convey mood and movement instead of attempting to tell a specific story, both emphasizing the set in a way that lighting effects alone couldn’t do and also to “evoke a memory of what the place may have been.” This ties back with the inspiration from the Michigan Theater; being in that now-parking garage feels like having one foot in the past and another in the present, and if you squint you can see the splendor it must have once held.

One challenge I face at BMD is adapting well known stories into a unique visual identity that still respects the style of its predecessor, for example, Frozen JR. The comparison of the original film and the musical adaptation presents a unique challenge- how do I respect the integrity of these stories without also stepping on the toes of the original designs? Instead of approaching these challenges in the same style as the original material, which doesn’t offer anything new to the discussion, it is better for the arts community to approach these projects in an innovative way. By doing this, we can successfully keep propelling forward.

The story of the Michigan Theater demonstrates the power of adapting to circumstances to avoid a stagnation of creativity and innovation. I think it's neat how a show all the way over in Berlin was inspired by the grandeur of Detroit and this demonstrates to me how concepts can be repurposed in a creative way from any source material. As an illustrator, I believe that there is nothing wrong with taking an outdated idea and revamping it, but you must strive to approach this in a contemporary way. If an artist persists in creating something that no longer resonates with an audience, then they must reevaluate what they’re doing. Instead, we should encourage unique content that stands on the base of these original ideas but has something new to say.