To place an order, complete the order form below or contact your Music Theatre International representative. If you have any questions, you may call BMD at 1-800-277-0343, or request information.

Don't see what you're looking for?We're constantly adding new shows to our product library. If you're planning a production that you don't see, drop us a line at (800) 277-0343 or click here.

Guys and Dolls JR is an adaptation of the show considered by many to be the perfect musical comedy. Guys and Dolls ran for 1,200 performances when it opened on Broadway in 1950. Evoking the grime of Damon Runyon’s mythical New York City, ScenicProjections bring this classic musical roaring into the present with seamless transitions and realistic animation that absorb audiences in this oddball tale of gangsters and gamblers of the Big Apple’s underworld.

BMD offers various features as displayed in the chart below, providing an affordable option for every theatre with an initial 4-week rental period. Please click here or call BMD at 1 (800) 277-0343 to recieve a no-obligation custom quote for your organization with exact pricing for the Guys and Dolls JR Scenic Projections. 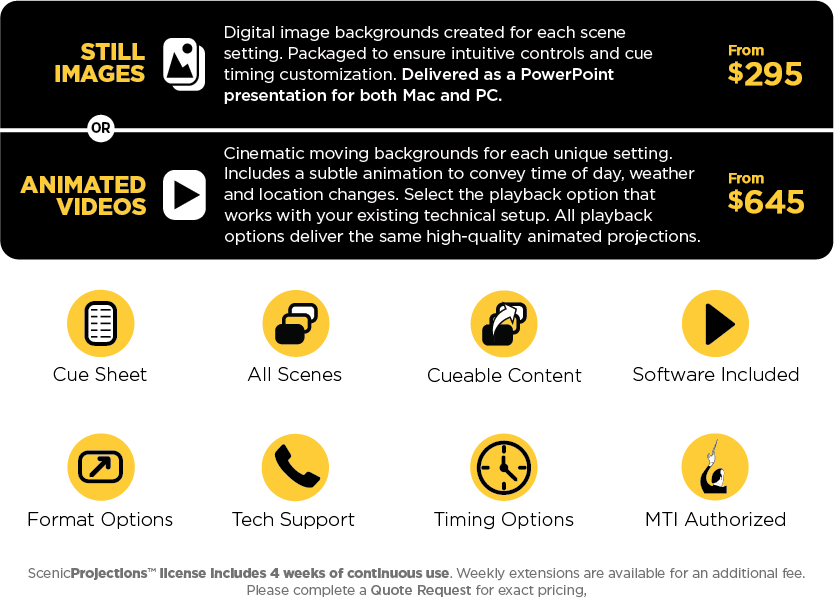 Please contact Music Theatre International for the Guys and Dolls JR Scenic Projections licensing and ordering information. To purchase the Guys and Dolls JR Scenic Projections online and have it billed to your Music Theatre International account, please complete the form on this page. Otherwise, please contact BMD for general information about the product and to assist with any technical questions your team may have. To request a quote, please click here. If you have any questions, you can call BMD at 1-800-277-0343 or use the webchat feature on this website.